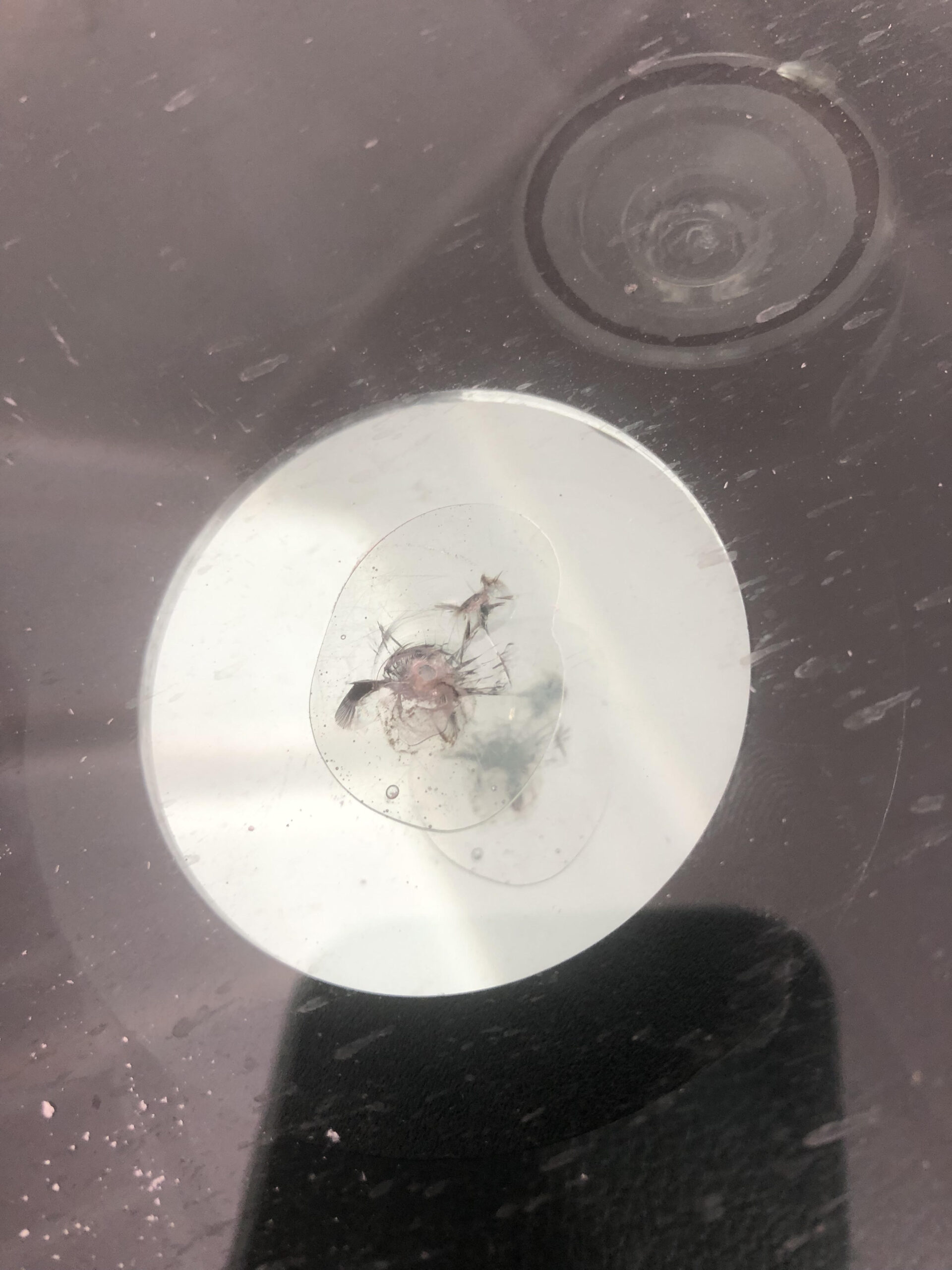 It’s a little warmer outside today but still a bit chilly. I take a look at my schedule for the day. Looks like it’ll be a steady day of repairing rock chips in the great city of Edmonton, Alberta,

One customer today had just moved to Edmonton from Toronto. He tells me that he got two rock chips on both of his vehicles, only two days apart. Welcome to Edmonton I told him. He laughed and asked if this a common occurrence here. I told him that Edmonton is the rock chip capital of Canada, if not the world. We both had a good chuckle.

He then showed me the two rock chips. I grabbed my tool box and started to get to work.

After inspecting the first chip on his vehicle, I go take a look at the other rock chip on his other vehicle. The first chip was a small combination chip with a few radials coming from the impact point. Nothing too serious. The second chip was a large combination chip with two impact points. And the rock took a big chunk out of the glass upon impact. It wasn’t pretty. Smaller than a “Toonie” but it was still a good hit.

I explained to the customer that there will be a scar leftover from the rock chips. I explained to him that the large chip is going to leave an even nastier scar because the rock took such a big chunk out of the glass. He understood and asked me to do what I could.

I get started with flexing both chips and preparing the breaks. They both had a fair amount of play to them. I started working on the small chip first, as I knew the large chip was going to take a little bit longer.

After I set up the bridge, injected the resin and flexed through the injector, I went to work on the second chip.

Now because the impact point was so large, I had to cap it first before I could start the repair. A cap is where you put pit resin over top of the impact point, cure it with the UV light, and then drill a hole into the cured pit resin over top of the initial impact point. This helps seal the open surface area and gives the windshield repair tool a more direct hole for the resin to be injected into. After all, the seal for the injector is only so big.

I started filling the large chip while flexing through the injector. I went and took a look at the smaller rock chip that I started with. Everything was looking good. I flexed some of the radials to make sure everything was filling in fine, which it was.

Next, I went back to the larger rock chip and added some more resin, just to be sure that the chip was filled in properly. After a few minutes of alternating between vacuum cycles and pressure cycles, I could see the resin behind my inspection mirror flowing nicely. Always a good sign!

Meanwhile, the customer and I are chatting about the recent weather in Edmonton, why they moved to Alberta and the odd small talk. I explained the windshield chip repair process and he seemed to appreciate the insights.

After about 20 minutes, it was time to cure the first combination chip. Everything filled in perfect. I reminded the customer about the scar leftover afterwards. He said he could barely see where the chip was anymore. I cleaned up the windshield and went back to work on his other vehicle.

I could see that the pit cap was a great idea. This windshield chip and all of its radials had filled in nicely. I keep flexing through the injector. This is to make sure all the resin was being pushed in properly.

Next, I begin curing the rock chip with UV light. This big chip was going to take a little bit more pit resin than normal. It took three cure cycles to fill in the large hole from the impact point. Everything is now filled in and the impact point was nice and smooth after a quick polishing with my wine cork and pit polish.

The customer took a look and told me how much better it looked now and I agreed with him. I told the customer that he got it done just in time. This big of chip could have spread out at any moment. After I cleaned up the windshield, I put my equipment back in my car.

I gave the customer my business card and a couple of stickers and then we exchanged goodbyes. I get back into my car, check where my next appointment is, and begin to make my way. All in a days work!

If you missed yesterday’s blog post, you can catch up here.

Send us a message