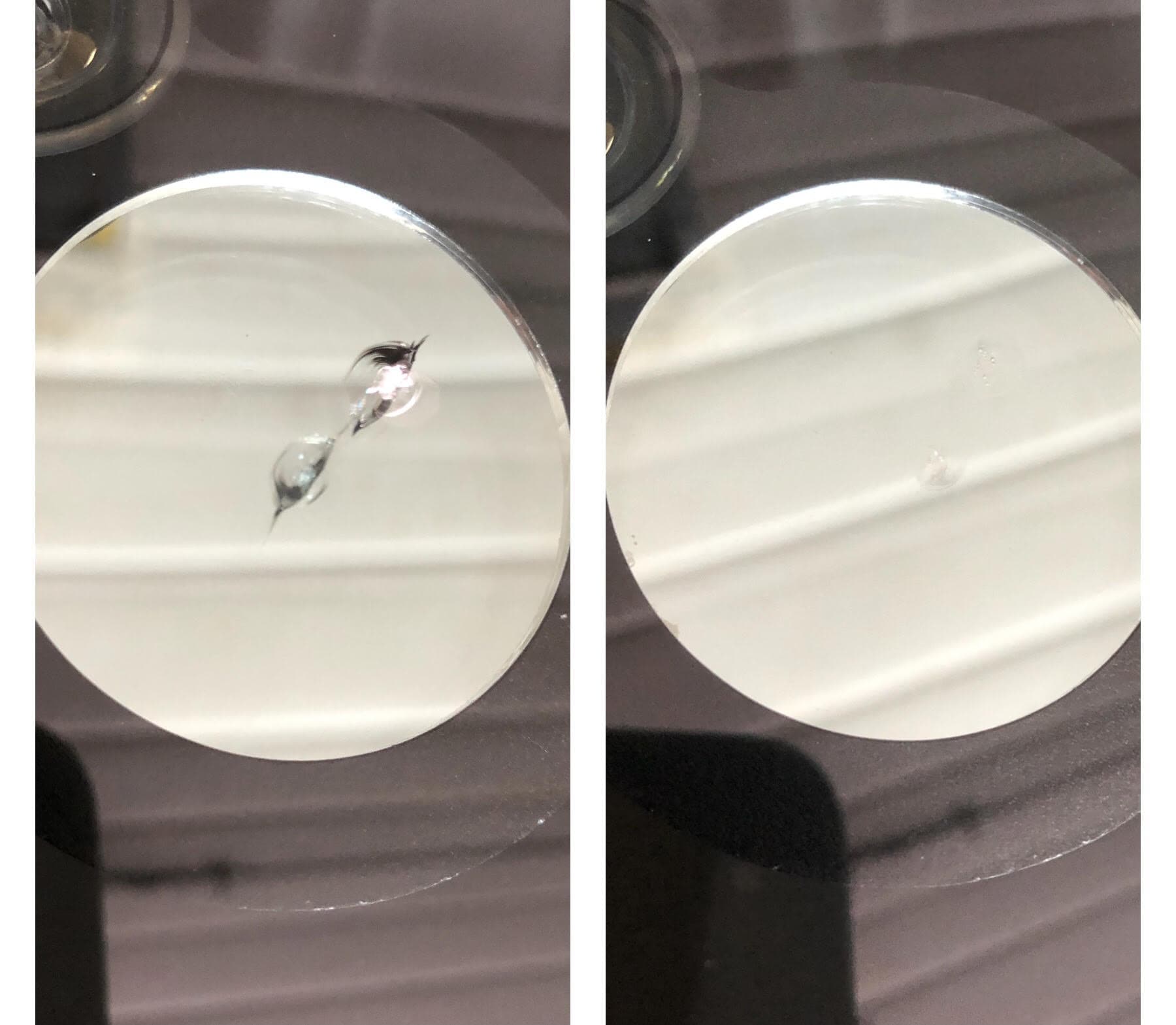 It’s February 23rd. I check my schedule for the day.

Looks like another full day of repairing rock chips for the wonderful people of Edmonton, Alberta!

One of my repairs today was on a newer Volvo XC90 SUV. I met the customer at their work inside their underground parking (which was a relief because it was pretty cold out today).

It was a small chip to repair but the customer told me that they were worried that it would spread out soon. I agreed with him and told him it’s best to get it fixed as soon as possible. As you may not know, it’s usually the small chips that do the most damage.

Upon further inspection, it was a small half moon chip. Basically, it looks just like it’s named. The chip looks like half of the moon. There’s a small impact point (from where the rock hit the windshield) and a small black half circle around it, resembling half of the moon.

I grab my tool box from the car and get everything set up. I asked the customer if they saw any other chips. He said he did not and I took a quick look with my handy flashlight. Nothing else!

I begin with lightly flexing the chip with my crack pen (not what you think it is, lol). This helps to open up any areas of the chip that may not already be connected to the impact point. Thankfully, this chip didn’t have any radials coming out so it was a fairly simple repair.

I grabbed my Dremel drill and began to slightly open up the impact point with my fine carbide bur. Maybe 10-15 seconds of drilling and we’re good. This helps clear out any dirt and shattered glass. Next, I flexed the chip again, just to be safe. Looks good.

I then began my process of filling the rock chip. I placed my repair bridge over top of the impact point, dropped a few drops of resin into the injector and let my machine do all the work. Starting with a vacuum cycle, the bridge slowly sucked out the air that is trapped inside the glass.

Next, was a pressure cycle. This is the part where the injector plunger is in the downright position and is slowly pushing resin into the glass. Because this was a smaller chip, it didn’t take very long for the resin to fill in.

The customer and I chatted about our day, the weather, events around the city of Edmonton and a little bit about my business and the windshield repair process. This customer found me on Google and was pleased to have found a mobile service that comes to him. He also said he thought the online booking process was very simple to use. That’s always music to my ears!

After about 20 minutes of working and chatting, I could tell that the chip was just about ready to be cured with my UV light. I began to flex lightly through the injector with my metal flex pin. Looks like all the air has been removed. Excellent!

While this chip was curing, I gave the customer a business card and a couple of stickers. I told the customer that the stickers are to be placed over top of a new chip. This helps keep it clean and dry until they can get the new chip repaired.

After the rock chip was done curing, I grabbed my razor blade, took off the plastic tab, sprayed a small amount of window cleaner over top and began scraping away the excess resin. Next, I grabbed my wine cork and some pit polish and cleaned up the mess from the resin. The polish also helps clean up the impact point. I cleaned up the area of the windshield that I was working on. Good to go!

I informed the customer about the scar leftover from the chip repair (although it was so small, you could barely see it). The customer replied saying he wasn’t concerned about the scar, he just does not want the chip to spread out. I reassured him that he is now good to go. One less thing to worry about, I say.

We exchanged good byes and went our separate ways. Another windshield saved from a costly replacement. I get in my car, plug in my next appointment’s address on my phone’s GPS and start to make my way. On to the next one!

Send us a message

Dynamo Windshield Repair has been repairing rock chips in Edmonton since 2019.

Every windshield chip repair is backed by our lifetime warranty.